Is the change curve a myth?

Is the change curve a myth? 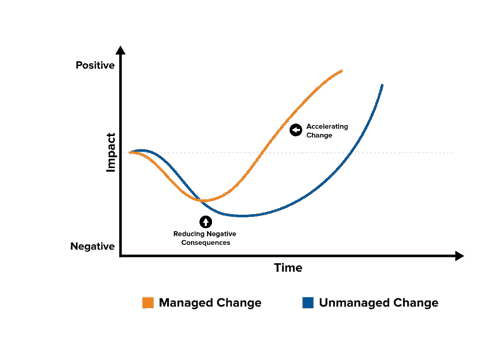 A recent discussion on LinkedIn asked if the change curve was a myth or not. This was based on this blog post suggesting or rather stating it is a myth. So I decided to look into it from a research point of view:

The original change curve was not actually meant to be about organisational change at all. It was developed by Elisabeth Kubler-Ross in papers published in 1969 and 1970 in the The International Journal of Psychiatry in Medicine in which she described the five stages of grief in what was originally called the Kubler-Ross model for death and bereavement counselling, personal change and trauma.

Between 1963 and 1971 Dr. Walter Menninger a senior psychiatric consultant for the Peace Corps conducted a study (published in 1975) looking at how Peace Corps volunteers reacted to deployment abroad. He concluded with a model that almost mirrored Kubler-Ross’s.

In 1976 three British researchers; Adams, Hayes and Hobson published a book called ‘Transition: Understanding and Managing Personal Change’ in which they analysed the effects of many different types of change on humans in a wide range of situations. This work also showed a similar profile of reactions to change which conformed closely to the work of Kubler-Ross and Menninger. In 1990 a paper published by the researchers Dottie Perlman and George Takacs in the journal Nursing Management noted that there were striking similarities between Kubler-Ross and Menninger’s models of personal reactions to change and what actually happens during organisational change in health organisations. This work was finally transformed into what is now seen as the classic change curve by Schneider & Goldwasser in 1998.

But is there any evidence?

But what about the evidence that this actually happens in organisations?

Well there are a few papers that looks at this. In 1999 researchers from The University of Alabama conducted a series of studies which validated the initial performance decline and subsequent improvement in performance during team change events in a couple of organisations. Then in 2002, a paper published by researchers from the US entitled “The Death Valley of Change” reviewed much of the previous research evidence for the performance curve and also conducted their own study. They found that 13 of 15 previous studies had also found valid evidence for the existence of all of the elements of change curve.

In 2010 a paper published by researchers from universities in Finland and the US entitled ‘Empirical validation of the Classic Change Curve on a software technology change project’ found that change in IT change projects closely fits the change curve.

So there you have it.

The myth of the change curve is itself a myth. The change curve, on the basis of the research evidence, does exist and is a real phenomenon.

Now does this mean that there will always be a dip in performance during organisational change?

In a book published in 2015, German authors Klaus Leopold and Siegfried Kaltenecker note that the dip in performance in the change curve occurs when the change necessitates that the people in the organisation have to unlearn old behaviours, processes and systems and learn new ways of doing things. Also new systems and processes need to be embedded in the organisation and made to fit with existing structures and processes. They argue “During the process of change, it is almost always the case that something new must be learned and, as is all too frequently forgotten, something old must be unlearned. Structures must be brought to life; processes practised; competences acquired; patterns of behavior cultivated.” (p110)

There is a followup to this post Is there always a performance dip during change – https://www.oxford-review.com/performance-dip/

Another myth or is it true? Do 70% of change projects really fail?