Does a positive mindset really make a difference to success? New research.

Does a positive mindset really make a difference to our success?

Do you have a more positive mindset and orientation to life or do things get you down easily?

How quickly do you bounce back?

Do you believe that being more positive means you are more likely to achieve your goals?

Some fascinating new research has been looking at these questions and in particular if having a positive mindset makes a difference to whether entrepreneurs are successful or not.

Looking at the most successful entrepreneurs of the modern day, a number of stereotypes emerge about their character and the acclaimed role of positive thinking. The late Steve Jobs of Apple was a driven man always seeking to break new ground and then dominate it. He drove his staff just as hard as he did himself and expected nothing short of perfection from himself and his core team. His relentlessly positive outlook (or so the story goes) took his business through some huge highs and lows. This in turn led Apple from his parents’ garage in California to being one of the biggest companies in the world today.

The question is does having a positive mindset and orientation lead to success and does the opposite, i.e. having a negative or pessimistic orientation, lead to more failures? This is a common belief and the core of thousands of books, but is it true?

Research just published in the journal Applied Psychology looked at how a positive or negative orientation impacted 246 entrepreneurs (143 women) who had been running their businesses for at least two years and were either married or in a stable relationship. The researchers from Poland and Italy were testing the hypothesis that, “more positive entrepreneurs may engage more strongly in personal goal realisation thanks to higher resistance to stress and a greater availability of personal resources.”

The first thing the researchers discovered was that people who are more optimistic also tend to feel better about their goals than those with a more negative outlook.

The next thing they found was that achievement has a direction. This is a significant and important finding.

The researchers discovered that having a positive orientation on its own does not necessarily and automatically lead to success and achievement. However, when looking at the entrepreneurs that do tend to achieve their goals, they found that they have a positive outlook (measured in terms of self-esteem, life satisfaction and optimism) and they have positive personal and family goals first. This is important. The people whose goals were mainly business success orientated, even if they were positive, were significantly less likely to achieve their goals than those who had goals around being a better person, having better relationships and providing for their family and as a consequence saw the fulfilment of these goals as being through their business goals.

In effect the achievers tend to strive to accomplish positive personal goals focused around making themselves better and making things better for their family first.  As a result the researchers found the entrepreneurs also tend to have positive work goals such as to make a difference or build something.

Entrepreneurs with a more negative outlook (lower levels of self-esteem, life satisfaction and optimism) tend to either lack personal development goals or frame them in the negative, for example ‘not make mistakes’ or ‘I just need to survive this’. These entrepreneurs were significantly less likely to achieve their goals than either the positively orientated primary focus on business goals group and the higher achieving positively orientated primary focus on self and family development with a secondary focus on business success.

Achievement has a direction which is only partially accounted for by having a positive orientation (self-esteem, life satisfaction and optimism). People who focus on their own and their family’s development tend to be more resilient and therefore better at achieving their business/work goals compared to those who focused on their work goals first and the family and their own development as a second regardless of how positive the individual is.

So if you want to achieve your life goals this is what we have learned: 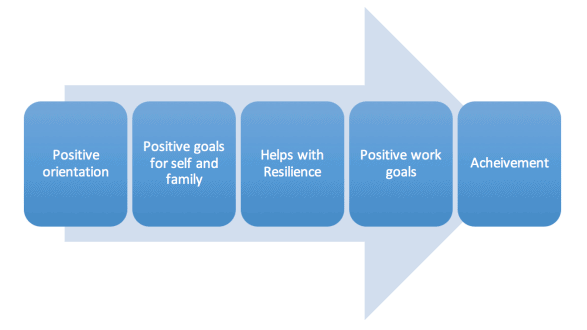 Focus on your own development and that of your family first. Set positive goals here and then use work or your business to help to secure that. A positive mind-set does make a difference if you get it in the right order.