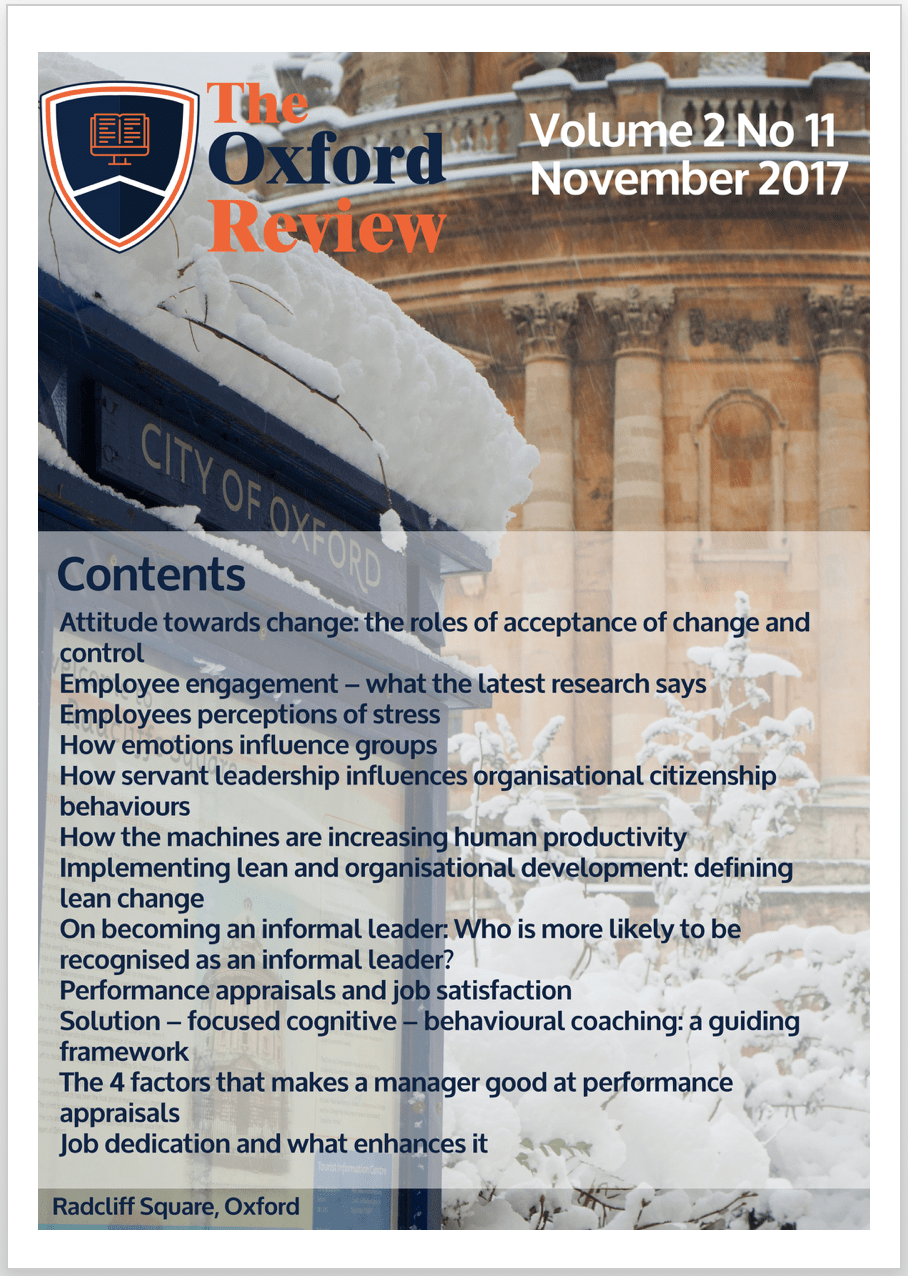 Attitude towards change: the roles of acceptance of change and control

This briefing is from a new paper where the researchers looked at the connections between individual and collective attitudes towards change, the role of acceptance of change and how it may be connected to a locus of control. The study found that an individual’s change behaviours (acceptance of change or resistance to change) is significantly predicted by their general attitudes towards change, which in itself is predicted by an individual’s:

A brand new study by a team of Australian researchers from four different universities looked at employees’ perceptions of what causes and reduces stress in the workplace. Interestingly they look at the interventions that make a difference. A really useful study for anyone interested in reducing stress in the workplace, either your own or other peoples.

A new study by researchers from the University of Amsterdam has reviewed all the research literature about how people’s emotions impact the groups and organisations they belong to. A raft of recent research is showing that the traditional view that emotions in organisations tend to muddle critical thinking and can incapacitate groups, leading to impulsive and often dangerous behaviours, is only an issue in some contexts. Find out what they are and what can be done about it in this briefing. All is revealed!

As mentioned in previous research briefings, servant leadership has been shown to have better and more stable outcomes than any other leadership style, including transformational leadership.

How the machines are increasing human productivity

A slew of studies have recently been published looking at what are known as fuzzy biotechnical control systems for human operators. What this means is a set of technological interfaces for human beings that are aimed at increasing our engagement, commitment and productivity through the use of biometric feedback. It looks increasingly likely that technology won’t simply replace humans in the workplace, but that most commonly it will augment and improve our capabilities…

Many businesses fail to sustain lean practices after adopting them. One of the reasons is that adopting lean in a traditional organisation requires a significant level of change in organisational, behavioural and cognitive thinking. This briefing looks at a new study just published from New Zealand that looked at the issue from an organisational development point of view, to see what the problem is and what can be done about it.

Informal leadership has been a growing topic of research in recent years, particularly in the light of the growth of more informal organisational structures. This year alone (2017) there have been almost 28,000 peer-reviewed papers published looking at informal leadership.

One of the core questions that researchers focused on is how informal leaders become identified and recognised in organisations. Additionally, there is a question about the impact informal leaders have on people’s thinking, behaviour and effectiveness. The subject of this briefing is new piece of research from Germany which aimed at answering these questions.

A number of previous studies have found that solution-focused cognitive-behavioural coaching can be effective both at increasing performance and dealing with stress and burnout. One of the problems organisations face is that a focus primarily on performance tends to have a series of negative consequences including stress, fatigue and burnout. Indeed, there is research evidence to suggest that there is a stress and burnout epidemic, as a result of organisations’ relentless focus on performance. This briefing looks at a really useful paper which provides an excellent framework for coaching anyone in the performance/well-being space.

The 4 factors that makes a manager good at performance appraisals

The study looked at 498 managers and their behaviours with performance appraisals. Previous research has found that the level of conscientiousness and self-monitoring the managers displays has a significant impact on their performance doing appraisals. This study goes a step further and finds that there are 4 factors which makes the difference from a managers point of view.

Job dedication and what enhances it

A new study by researchers from three universities in the United States and one in China wanted to have a look at the primary predictors of job dedication. Job dedication refers to a set of behaviours that are based on the individual’s self-discipline such as:

This study wanted to know what predicted job dedication and looked at a range of factors including: