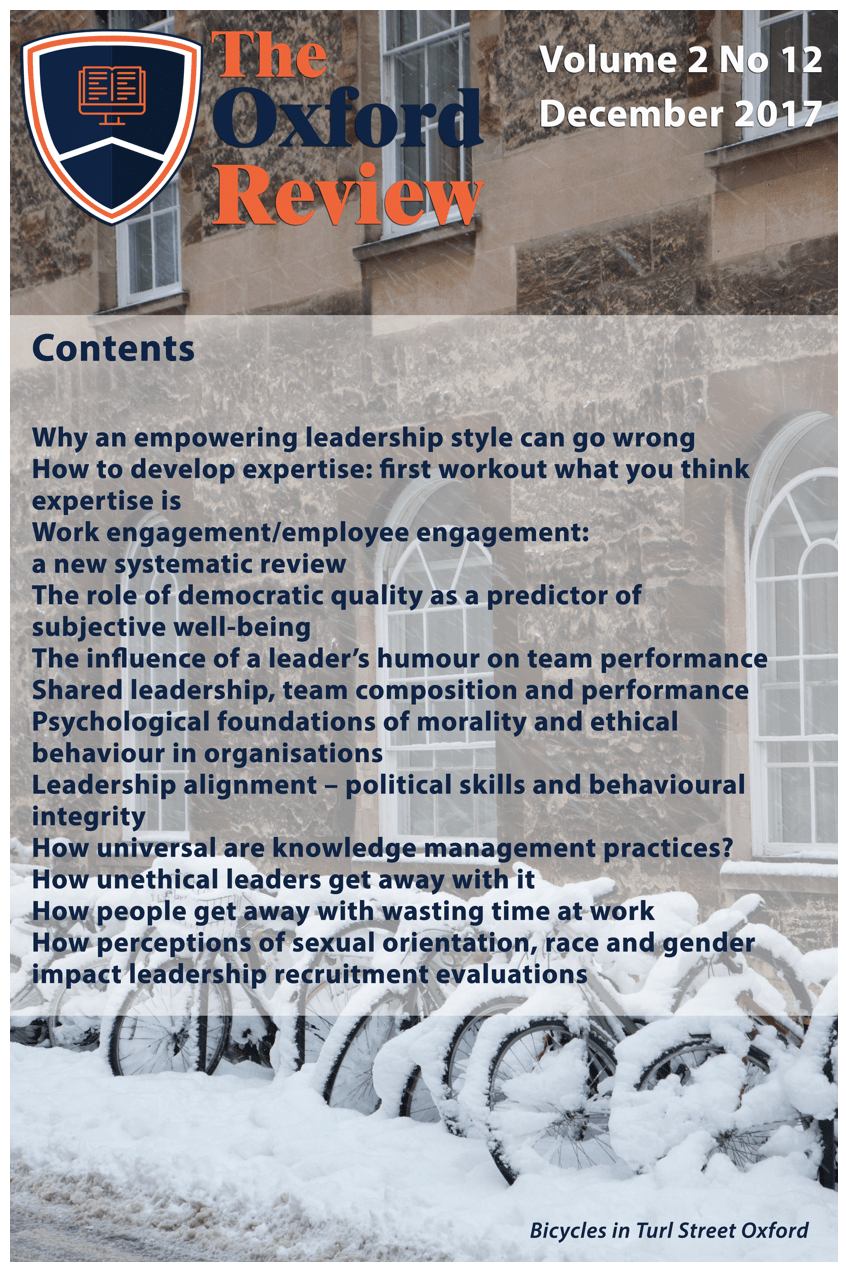 In issue 12 Volume 2 of the Oxford Review…
Research briefings of the very latest research including:

Why and how an empowering leadership style can go wrong

How to develop expertise: first workout what you think expertise is

The idea of having expertise in an area is an important one in organisations and yet we rarely give much thought to what this might mean. For example, does having expertise imply rational thought, are we talking about levels of intuition, or is more implicated in the idea of expertise and if so what more? In short, what do we mean when we refer to someone as being an expert or having expertise? A new paper sheds some light on this issue by considering the idea of expertise and the character of an expert from three perspectives. These questions matter particularly in terms of the development of expertise and what our expectations are of ‘the experts’. Additionally, in this era of ‘fake news’, it is important to know who to trust. Plato himself once commented that even a wise person finds it difficult to distinguish a fake physician from a real one. This study has implications for anyone involved in learning in organisations.

There are numerous recent studies showing subjective well-being (SWB) as a predictor of work-based behaviours and performance. Subjective well-being refers to an individual’s cognitive and affective (emotions, beliefs and feelings) evaluation about their life in general and any period thereof. People’s evaluation of their life at any particular moment in time includes judgements of general satisfaction and feelings of fulfilment that come from their appraisal and assessment of a range of situations that they focus on subjectively. Every individual uses different criteria in order to make a judgement about the general level of satisfaction and feelings of fulfilment, hence the ‘subjective’ part of the phrase.

The influence of a leader’s humour on team performance

Humour is an essential human attribute that has been found in previous studies to be a factor in perceptions of leadership and relationship effectiveness. Humour often makes working environments significantly more enjoyable and productive. Additionally, humour reduces stress, can enhance communication, motivate and help to create effective performance in organisations. Humour, however, is not a one-way positive attribute. It can also be inappropriate, cause barriers and damage relationships. A new study set out to find out:

One of the rapidly growing areas of research and interest in organisations recently has been the area of shared leadership. The importance of knowledge management and improved and flexible/agile functioning of organisations faced with rapid change and hypercompetitive environments has highlighted the requirement that members of organisations coordinate and share knowledge, expertise and leadership capability. A number of recent studies have found that shared leadership and mutual influence can significantly enhance team and organisational performance.

A new study by a team of researchers has examined the effects team composition characteristics and, in particular team size and gender diversity, has on the outcomes of shared leadership.

Psychological foundations of morality and ethical behaviour in organisations

In recent years there has been increasing interest, both within organisations, governments and research, in improving standards of ethical and moral behaviour, both in organisations and public life. Many of the avenues of research and organisational interest have been focused on moral cognition (recognising and thinking about ethical and moral aspects to situations and behaviour) and individual moral and ethical development. A new study published looks at the relationship between:

and how they inform our behaviour.

A range of recent studies have suggested that more politically skilled leaders tend to be more effective and are perceived by their subordinates as being more effective and trustworthy. In part, it is believed that this is the case because all politically astute leaders are able to make astute choices and skilfully package what they say and do in ways that appear to supporters and others to be selfless and in-service, as opposed to being self-seeking and agenda ridden. A number of recent research studies have suggested that politically skilled leaders are also perceived as being more ethical, even when the leader engages in unethical and irregular behaviour. Further, it has been found that politically skilled leaders tend to promote more ethical behaviours in their subordinates, even if they themselves are not displaying ethical behaviours.

A new study by researchers from two universities in the United States has looked at this issue in greater depth to find out what the connections are between:

How universal are knowledge management practices?

There has been a significant shift over the last 50 years in what creates industrial value from tangible assets, such as physical products, land and financial capital, to intangible products, such as knowledge. At the centre of this shift has been the development of knowledge management as a significant form of productive capacity. This study wanted to know how universal knowledge management practices are around the world. This is important not just for multinationals but also for people who work across national boundaries.

How unethical leaders get away with it

Usually when unethical behaviour is outed in organisations, the blame is laid at the door of the leader, with the cause being put down to bad leadership or a leader’s failure to enforce ethical and moral standards. Whilst such explanations are both common, useful and popular unethical behaviour actually goes beyond the leader’s own behaviour. A new experimental study conducted by researchers examined the influence of internal implicit theories on a follower’s readiness to engage in and contribute to unethical leadership. In the experiment, employees were confronted with a leader’s advice to carry out an unethical act, whilst they were engaged in an in-basket exercise. There were two separate studies involved in this research.

A recent survey of 10,044 employees found that workers waste just over two hours a day in their jobs. In the United States this is estimated to amount to a loss of some $759 billion a year. It is, therefore, not surprising that many employers and managers focus on employee productivity. In the academic literature employee time wasting is referred to as time theft and, in more recent studies, as time banditry. A team of researchers from the US have been conducting a series of studies looking at counter-productive work behaviours, particularly in the field time banditry.

An interesting study from Canada has just been released looking at whether the sexual orientation, race or gender of an applicant for a leadership position changes the way people evaluate that candidate.