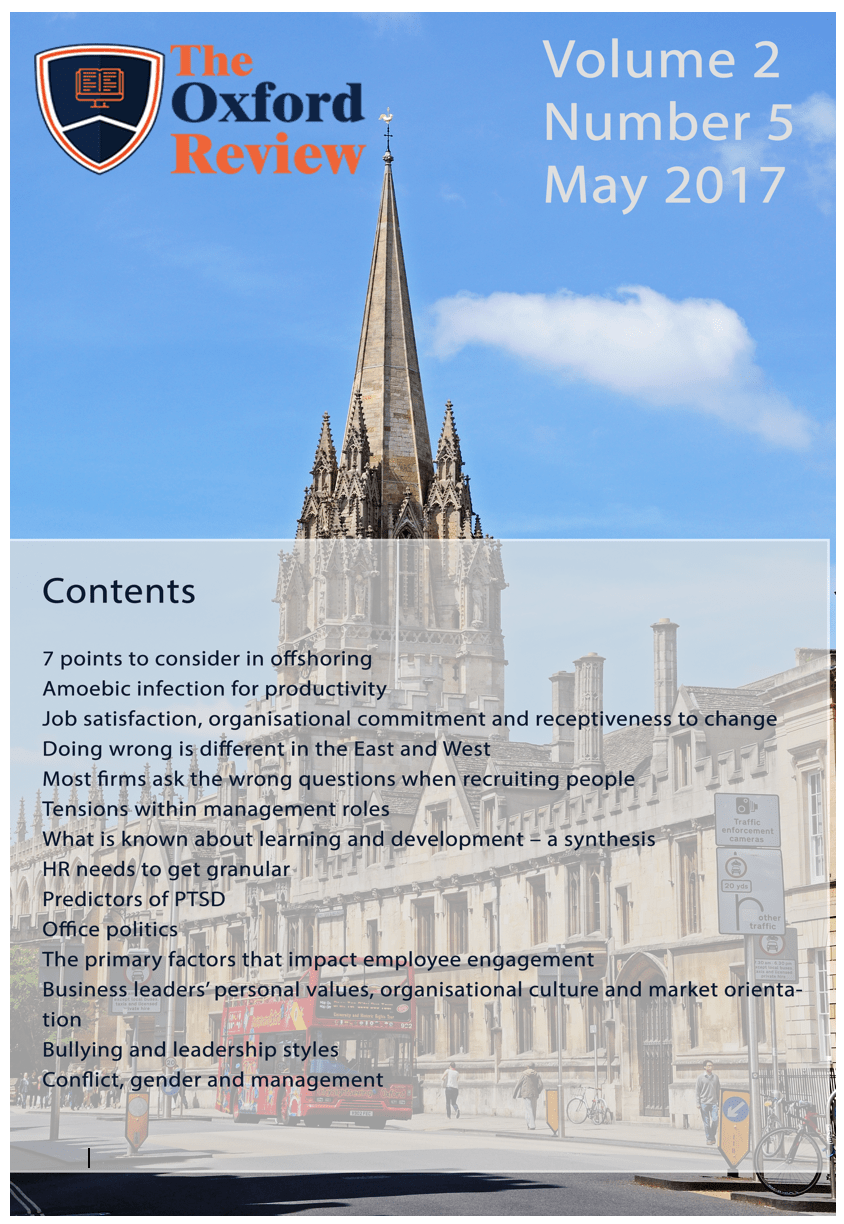 In this edition of the Oxford Review: The very latest research briefings:

1. 7 points to consider in offshoring
A new study just published looking at the effectiveness of offshoring has found that there are seven factors organisations need to consider…

2. Amoeba Management for Productivity
When people commonly think of ‘amoebas’ they tend to think of a single cell organism. However, there is a recent concept in management, the Amoeba Management System that has shown to significantly improve profitability and employment engagement across more than 600 businesses in Japan…

4. Doing wrong is different in the East and West
Research into company computer abuse in Korea has thrown up an important difference between East Asian workers and their Western colleagues in terms of their different ideas of wrongdoing…

5. Most firms ask the wrong questions when recruiting people
People are usually a significant proportion of most organisations’ competitive advantage. You don’t want large swathes of your talent leaving. Not only is this costly, but it can be destabilising. Being able to predict who is most likely to stick around and develop commitment to the organisation is worth its weight in gold…

6. Tensions within management roles
An interesting paper, just published, about the tensions faced by leaders in health care scenarios. It shows some really useful constructs for leaders and managers in other contexts. The study found that…

7. What is known about learning and development – a synthesis
The American Institutes for Research have just published a summary of what is currently known, and what needs to be researched further, about human development. The AIR (American Institutes for Research) have produced a large and comprehensive review of research, however what follows is a summary of the 13 main influences on learning.

8. HR needs to get granular
New Research has shown that Human Resources Management (HRM) tends to do best when it is tailored to the needs of individual departments, rather than operating on a ‘one-size-fits-all’ basis across an organisation…

9. Predictors of PTSD
A systematic review of literature that looked at military and emergency service personnel has found that some tests that are currently used to predict incidences of posttraumatic stress disorder (PTSD) and mental health conditions failed abjectly. Some newer measurements into physiological markers had interesting results, yet need more research to be effective. Additionally, some personality measurement has been shown to be effective as well.

10. Office politics…
Poor organisational politics has been shown to lead to turnover intention among staff in a range of studies around the world.

The definition of organisational politics is where individualism and personal ambition is promoted and part of the culture. This usually leads to…

A new study that looked at…

13. Bullying and leadership styles
Bullying in the workplace is a real and present problem in almost every sector. It causes poor productivity and, if widespread in an organisation, can lead to an impact on the company’s profits, as well as the mental wellbeing of those who work there and their peers.

A new study has shown that bullying is linked to leadership style.

14. Conflict, gender and management
New research looking at leadership may give an answer to the song of a man and woman bickering ‘Anything you can do’ (Howard Keel and Betty Hutton) – women it appears are better at team leadership than men. The research looked at the perceptual distance in managers’ conflict avoidance behaviour and its consequences for subordinates.