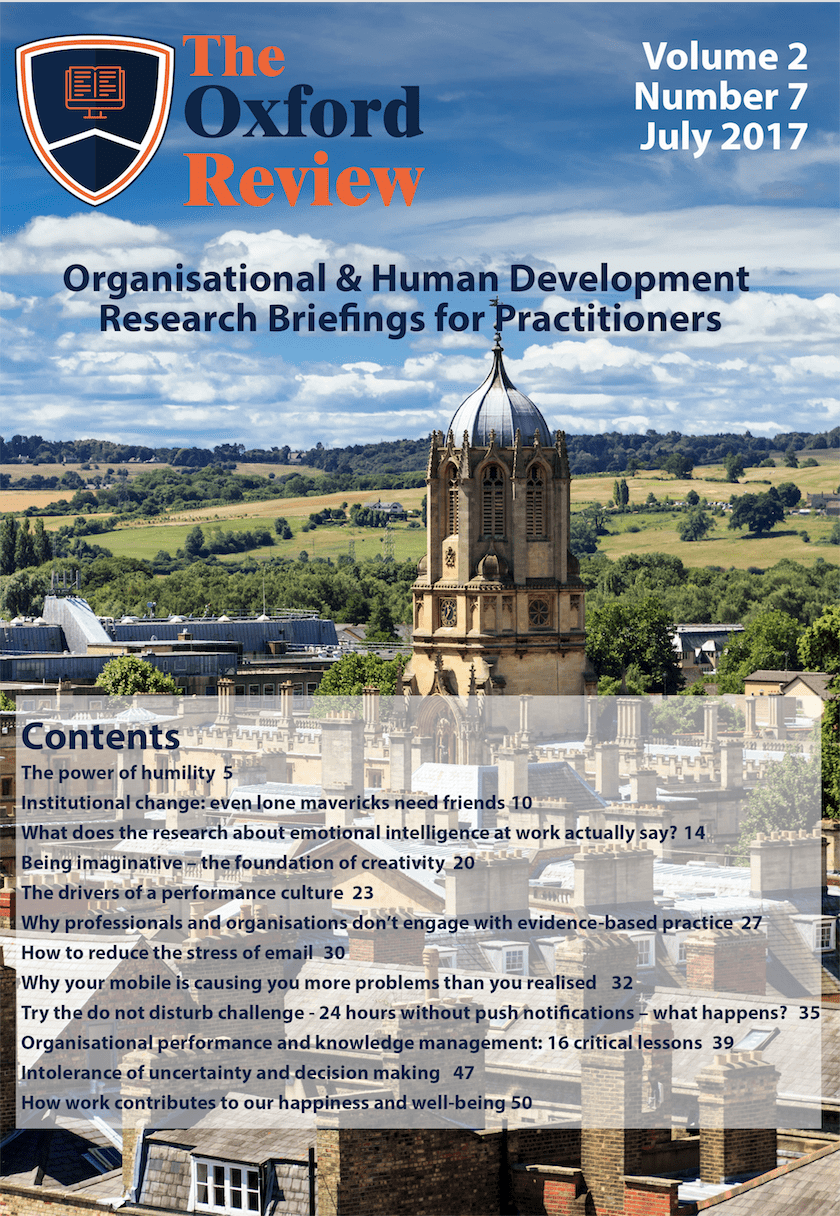 In this edition of the Oxford Review: The very latest research briefings:

The power of humility
This briefing looks at a new research study of the often overlooked attribute of humility generally and for leaders in particular. Previous studies have found that there is a strong connection between the level of humility a person has and their level of honesty. People with low honesty – humility levels have 22 characteristics that cause problems in organisations. The study makes a series of useful recommendations for developing humility.

Institutional change: even lone mavericks need friends
This research briefing reports on a study about the role of the organisational maverick in innovation and shaping the future. They study found that there are two types of maverick and defines the role they have in challenging convention wisdom and stopping organisations from falling into group-think.

Being imaginative – the foundation of creativity

A new study examines what it is that some entrepreneurs do that enables them to come up with million dollar ideas time and time again.

Why professionals and organisations don’t engage with evidence-based practice
Why is it that evidence-based practice has been successful in some sectors like health care and aviation and is struggling to gain acceptance in many other sectors? The briefing looks at a new study which finds some interesting answers and solutions to this problem.

How to reduce the stress of email
A number of recent studies have found that emails contribute significantly to our daily stress levels. This new study found a couple of really email management solutions to help us all reduce the stress created by emails.

Why your mobile is causing you more problems than you realised
A new study has found that our use of mobile technology is strongly associated with an increase in ADHD (Attention deficit hyperactivity disorder) symptoms in the adult population. The study reports on the issues mobiles cause people and propose a some useful solutions.

Try the do not disturb challenge – 24 hours without push notifications – what happens?
Carrying on the theme of the disturbances modern technology causes us, this briefing looks at some research findings around the 24 Hour Do Not Disturb Challenge. This has some serious performance implications for organisations.

Organisational performance and knowledge management: 16 critical lessons
A new literature review has just been published that reviews all the latest research into what we know about the connections between organisational performance and knowledge management.
Managers and leaders are increasingly becoming aware that their success and the competitive value and advantages of their organisations is largely dependent on and intimately connected to the unique knowledge that exists within their organisation.
The ability to be able to effectively create, store, disseminate, transfer and apply the unique knowledge that exists in any organisation is frequently part of their competitive advantage and unique proposition. Organisations that understand and leverage knowledge management effectively have a distinct advantage over those that don’t harness this resource.

How work contributes to our happiness and well-being

This briefing looks at a special review of literature funded by the Economic and Social Research Council and conducted by the Centre for Economic Performance at the London School of Economics and Political Science (LSE) into the role work and employment plays in our general wellbeing and happiness.