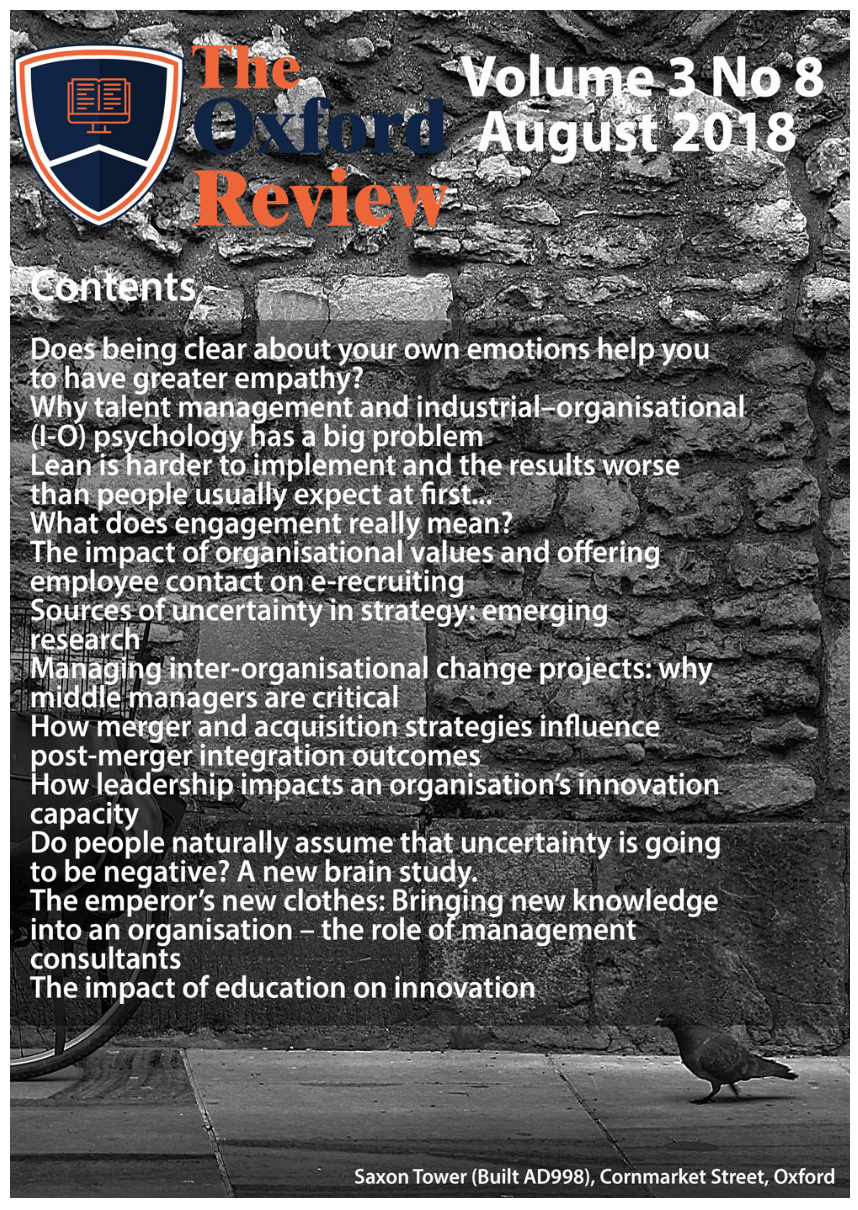 In this Month’s Oxford Review:

Does being clear about your own emotions help you to have greater empathy?

Some people find it really difficult to be able to separate out and identify the discrete and different emotions that they are feeling at any particular moment and others find it relatively easy. Emotional clarity, which refers to an individual’s ability to clearly identify, label and describe their own emotions, is starting to draw more research attention, due mainly to the fact that it is been shown to be an important factor in a range of interpersonal outcomes such as:

Talent management, learning and development practitioners and I-O psychologists play important and central roles within organisations these days. They are particularly influential across a range of issues in organisations, such as:

and a range of other engagements that have a significant influence on organisational outcomes.

The number of recent reviews of organisational talent management and I-O psychology practices has found that the range of practices, instruments and methods used in organisations include a significant number that have absolutely no validity or research backing whatsoever.

A new study by a team of researchers and practitioners across America has looked at this issue in depth to try to quantify the scale of the problem. They discovered a significant problem that they termed as anti-talent and anti-industrial-organisational psychology practices. This refers to the use of what the researchers’ term “the use of novel, trendy, simplistic or otherwise ‘pet’ frameworks and alleged ‘best practices’, regardless of their basis in science (and sometimes intentionally at odds with the research), to create a ‘buzz’ in an organisation for the industry, and/or achieve specific objectives…” Or to achieve ‘quick wins’, or score points with leadership or management, or simply to enhance their own status.

Over the last 30 years, lean principles have become mainstream, across and within many organisations, both in manufacturing and service industries. However, there are an increasing number of stories, evaluations and research studies that are showing that lean implementation to be fraught with difficulties. Further, there is much evidence to show that organisations instigating lean are not getting the results they anticipated. A number of recent research studies have identified a number of issues connected to lead implementation such as:

This research study was a longitudinal (over a period of eight years), qualitative study to examine the issues of implementing lean in non-traditional workspaces in the UK. The briefing will be interesting and useful to anyone interested in or involved in lean in anyway but particularly for people involved in lean implementation.

What does engagement really mean?

An area of increasing interest, both within organisations and research, is that of engagement work. However, when you start to delve into what people mean by engagement, you get a range of different answers. Katz and Kahn first coined the phrase ‘work engagement’ in 1978 and they framed it as an ‘attachment of oneself with one’s role’. However, as researchers and practitioners started to become interested in engagement work, three major understandings about engagement have emerged:

It is not difficult to see why there has been such an interest in engagement as a concept.
Engagement has been shown to predict a range of outcomes including:

A new (2018) study looking to create an empirical classification of engagement at work has worked out scientifically what factors are actually involved in engagement.

A useful briefing for anyone involved or interested in engagement.

The vast majority of recruiting these days is done online; a recent survey (2015) found that 100% of large organisations in the West now use internet-based recruiting systems to find and attract applicants. Largely, these web-based systems focus on using social media channels, as well as other job and recruitment specific websites, portals and services, in order to find and attract the highest quality candidates.
Previous studies have found that a range of factors increase the success of online based recruiting systems, such as ease-of-use, aesthetics, navigability, font or typeface, for example. Additionally, studies have found that how the characteristics of the job are portrayed online has a significant impact on the quality of candidate it attracts. Further, researchers found that the characteristics of the organisation and how they are communicated, for example the brand, stories in social media et cetera have a significant impact on the quality of the candidates attracted.

A new study has looked at the impact and effectiveness of the following on attracting and securing the right candidates with the attitudes, skills, achievement orientation and relationship orientation the organisation is looking for:

An interesting series of papers, briefings and research conference presentations are currently being published looking at the level of uncertainty in different strategic programs. Because strategies are future facing, there is always going to be a level of uncertainty around their feasibility, execution and impact. The risk factors inherent in any strategy will come from multiple sources including:

A new study has found that organisations tend to be good at quantifying known risks, but often fail completely to understand the range of uncertainties that surround their strategy.

This briefing is essential reading for anyone involved in strategy, strategy formation, development or implementation

Despite this, all indications are that many merger and acquisition strategies fail to meet their intended objectives and outcomes. Many previous studies have identified that whilst there are a diverse number of factors which seem to contribute to the failure of M&A’s ability to meet their objectives, a significant portion of failures or poor performance are due to the intricate nature of post-merger integration or PMI.

One of the post-merger integration factors that has been identified as presenting a significant challenge with M&As and the one which presents probably the largest risk is merging the people, their cultures, working practices, thinking and other issues, which are essentially all to do with the personnel and Human Resource Management (HRM).

Innovation capacity, or the capability of an organisation to invent new processes, systems and products, is a key indicator of long-term organisational outcomes, sustainability, competitive advantage and organisational flexibility. A number of previous studies found that leadership is a key factor in the promotion and facilitation of innovation and employee innovation behaviours at an organisational level.

A new study looked at the impact of leadership on organisational innovation capacity.

This is an important research briefing for anyone involved in innovation, leadership or leadership development

Do people naturally assume that uncertainty is going to be negative? A new brain study

Previous studies have found that, despite a range of reactions to ambiguity and uncertainty (from wholly negative through to positive), the initial cognitive and emotional response is always negative. Studies in 2016 found that reaction times to ambiguous situations are significantly longer when an individual has a positive response to it compared to people who have immediate negative response. This suggests there is some additional processing going on in the brain, it is assumed, in order to turn the initial response to the ambiguous situation into a positive one.

Virtually all of the research looking at this issue has been behavioural and based on physical response times (for example, having to push a button to indicate whether the subject feels positive or negative about the situation or cue presented).
A new study conducted fMRI and multivariate neuroimaging studies of this phenomenon to see what is going on at a neuronal and pathway level in the brain as subjects were presented with ambiguous visual cues.

The results will be of great interest for anyone involved in learning, leadership and management development or uncertainty and ambiguity in general

The emperor’s new clothes: Bringing new knowledge into an organisation – the role of management consultants

A new study has examined this issue and doesn’t make comfortable reading for anyone involved in Management Consulting, particularly in larger management consultancy firms.

The impact of education on innovation

A new large-scale study across 96 countries and 139,991 individuals with a range of educational backgrounds from none at all through to people with PhDs has had a look at this issue. Previous studies have shown that, at a national level, education increases levels of innovation and economic growth.

Participation rates in education has been shown to account for the economic differences between countries around the world.

Formal education, even at primary and secondary school levels, has been shown to do more than just promote the acquisition of skills and knowledge. A number of studies have found that education tends to increase the level of autonomy and personal freedom an individual enjoys throughout life.

A new study has looked at how education changes, both in the individual’s values and how this manifests itself nationally.